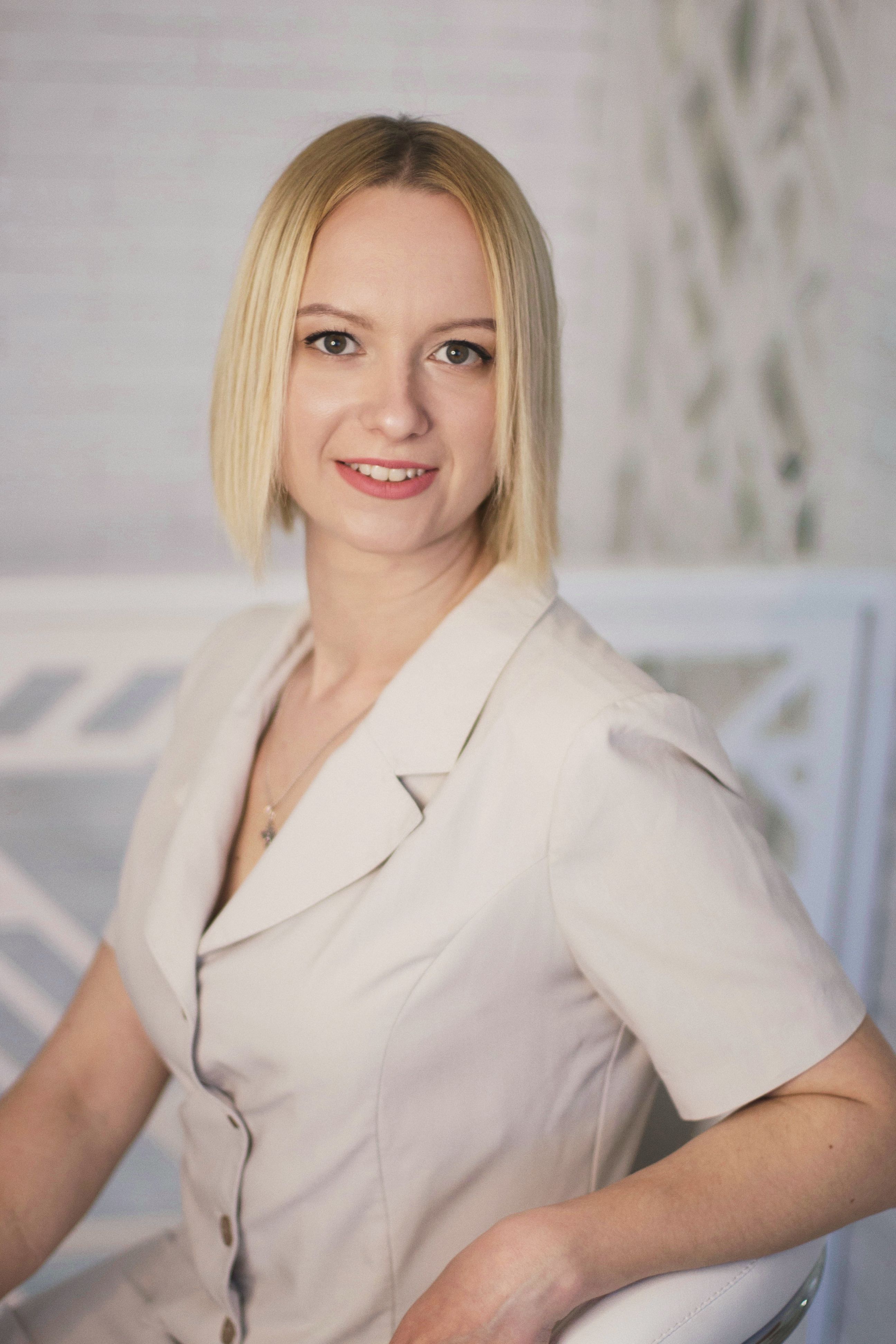 Mariia POLOZ, Ukraine
PROJECT: Transparent Budget Is Not A Lux

Enthusiastic about transparency and citizen engagement, Maria is working towards making local and state governments more accountable and citizen-centered.

In her capacity as a Legal Counsel in Transparency International Ukraine, she is working with the team responsible for making reforms at the state property management in Ukraine; previously, she contributed to the Transparent Cities Project on behalf of the TI Ukraine. As a Deputy Head of the NGO – Solidarity and Evolution and an Associate in the Law Firm – Yaremchuk, Safoninkova and Partners, she has been involved in human rights defending activities and youth development since 2018. In 2020, her proposal on anti-corruption education in the Ukrainian education system was supported during the public sessions on the National Anti-Corruption Strategy 2020-2024 and included in the Strategy by National Agency for Prevention of Corruption (art. 2.2).

“I am more than excited that my team members and I finally drew the people’s attention to the local budget, reached the larger public, and motivated the media to investigate the public expenditure more extensively. This project played a huge role in my professional career since the skills and experience acquired within the Eastern Partnership Civil Society Fellowship helped me get recognized by the leading international organizations. For now, I am engaged in the new professional journey with Transparency International Ukraine as a Legal Counsel working on improving public property management.” – Mariia POLOZ 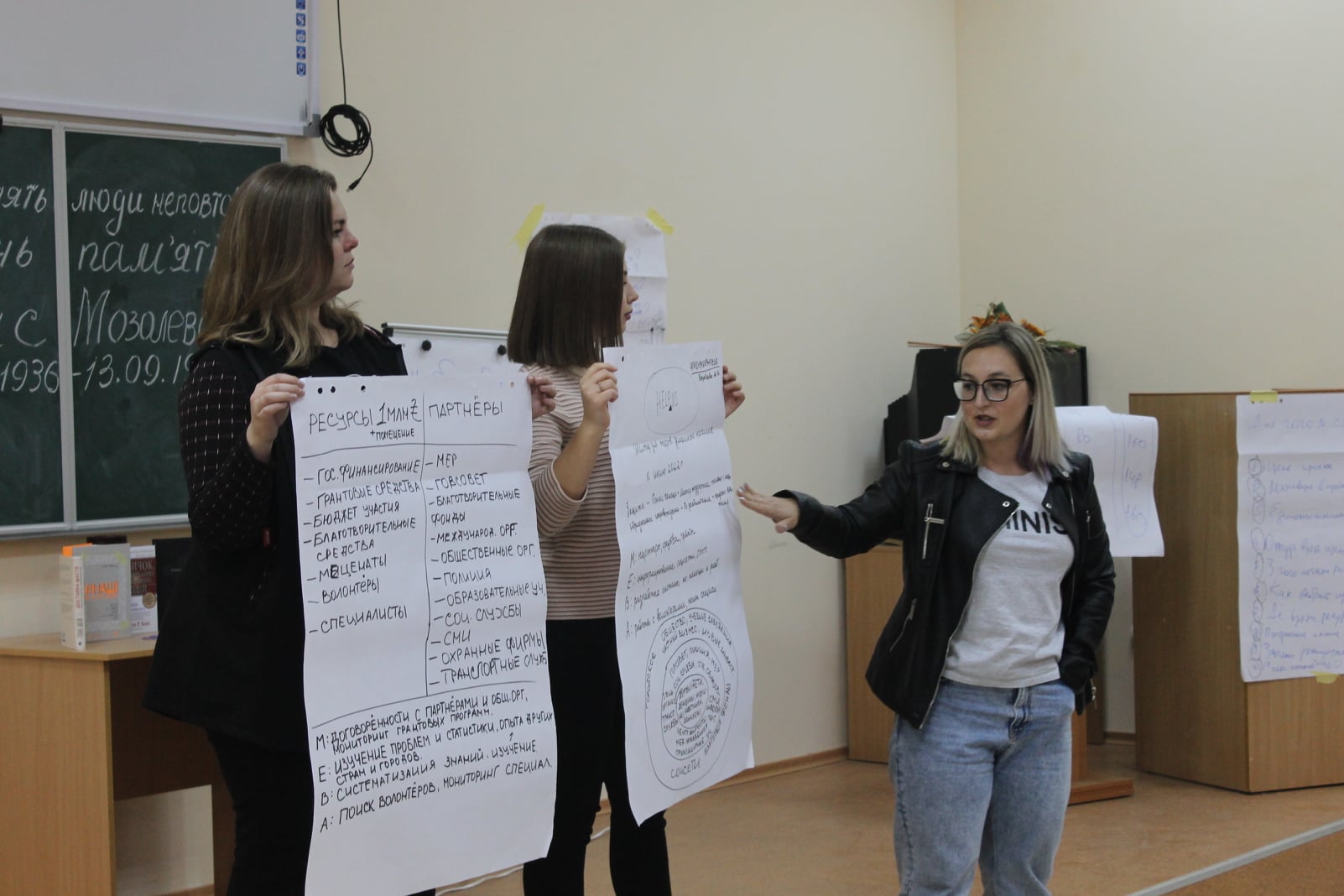 Transparent Budget Is Not A Lux

The action: Transparent Budget is not a Lux aimed to engage the citizens of Nikopol (a city in the Dnipropetrovsk Oblast of Ukraine) in monitoring the municipal budget and increase their participation on the local level. The action was implemented in three phases. First, Maria researched the municipal budget from the perspectives of education, healthcare, public expenditures and infrastructure (construction of roads and bridges). Following this, the project team organized awareness-raising campaigns and discussions; through the social media posts, publications and creative infographics, young people actively engaged in the discourse. At the last stage of the project, Maria organized awareness-raising training for the young leaders to advocate transparent budgeting tools and held a roundtable discussion engaging the project participants, local authorities, and representatives from the business & non-governmental sectors. The latter event served as a platform to collaborate with the decision-makers and share recommendations.

The project delivered the budget monitoring research document with a creative infographic on the municipal budget priorities of Nikopol City. Also, the action engaged 40 active young leaders and raised their awareness in participatory budgeting. As an outcome of the training, the participants developed 7 seed project initiatives on the topics of sports and rehabilitation centers, shelter for victims of domestic violence, workshops and education, etc. Also, through the visibility campaign, action reached nearly 161,452 people via social media channels; 60,000 local citizens via the outdoor advertisements, and 8,020 readers via the newspaper publications and informed them about the Nikopol budget expenditures. On top of that, the roundtable meeting facilitated dialogue among the stakeholders from the public, private and non-governmental sectors.  All in all, the action contributed to increasing the transparency of the local government and the budget of Nikopol City due to the high public control. 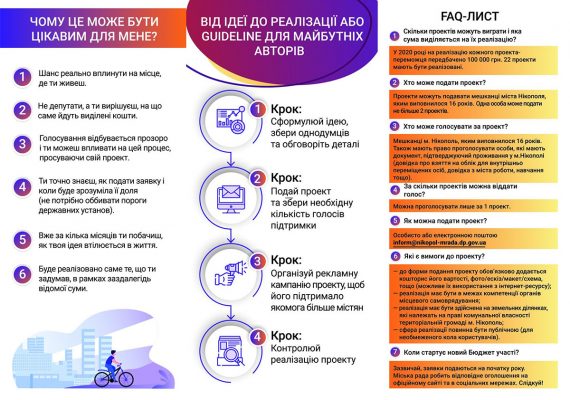 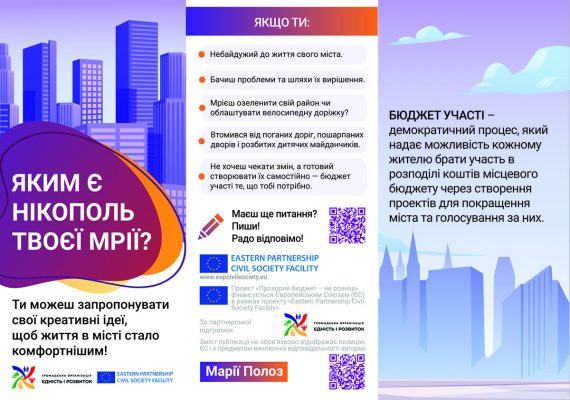 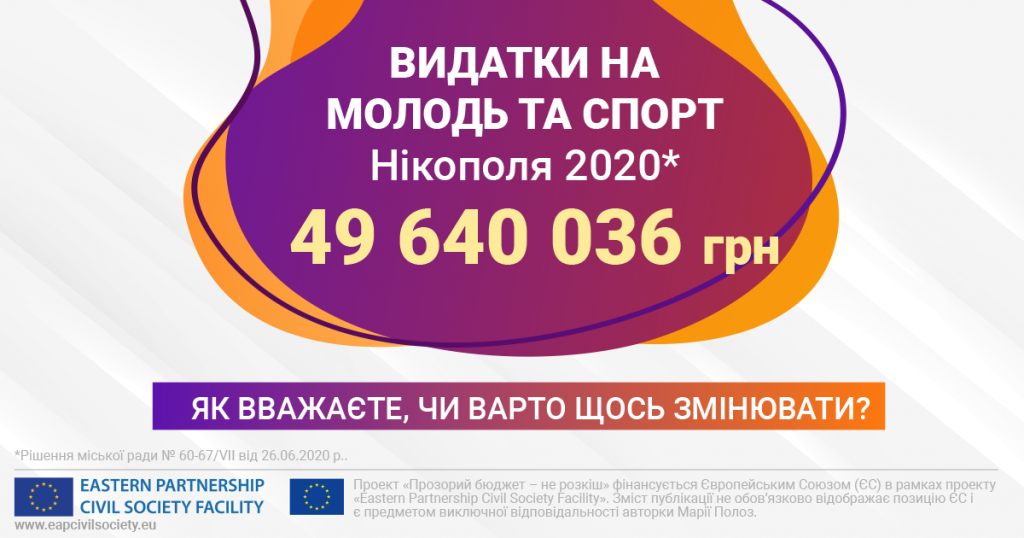 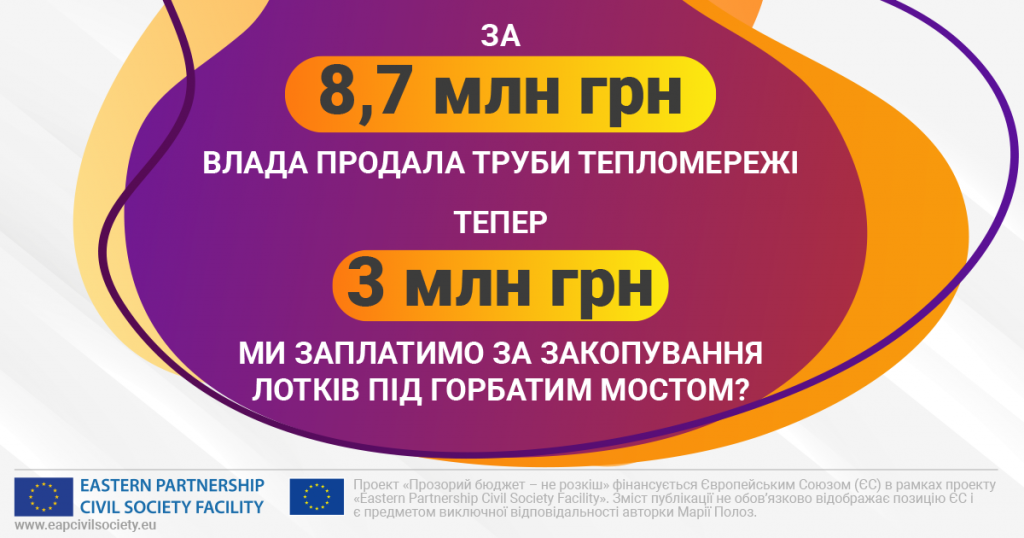 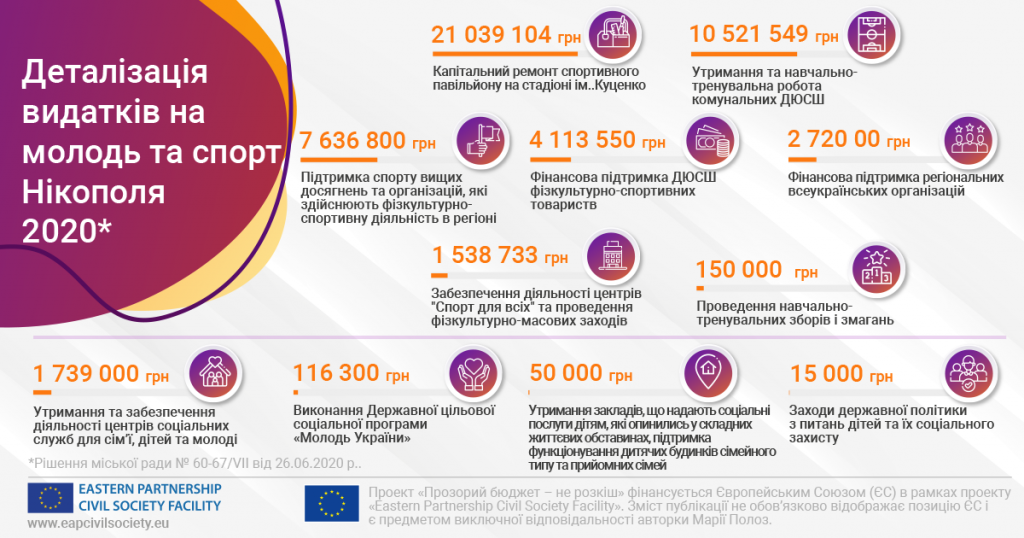 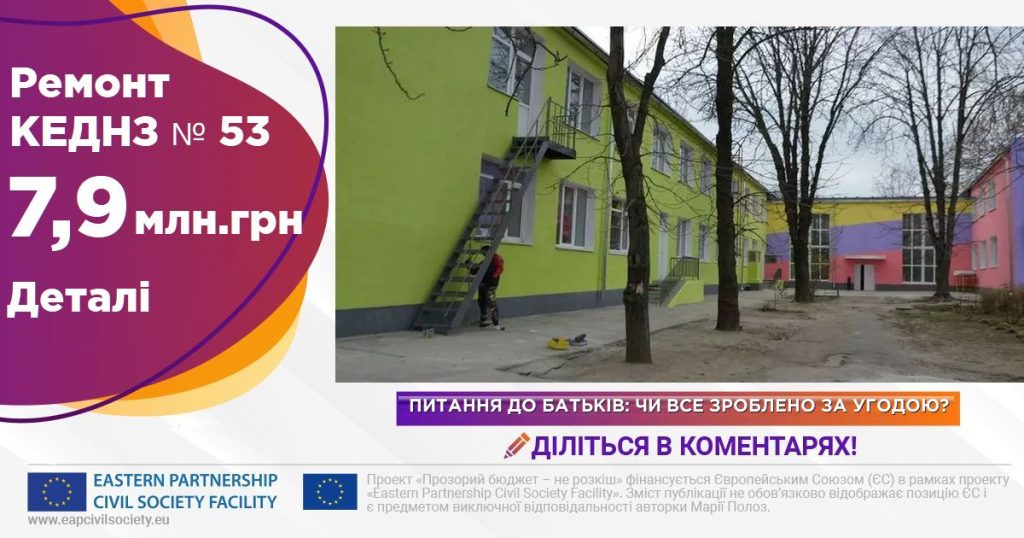 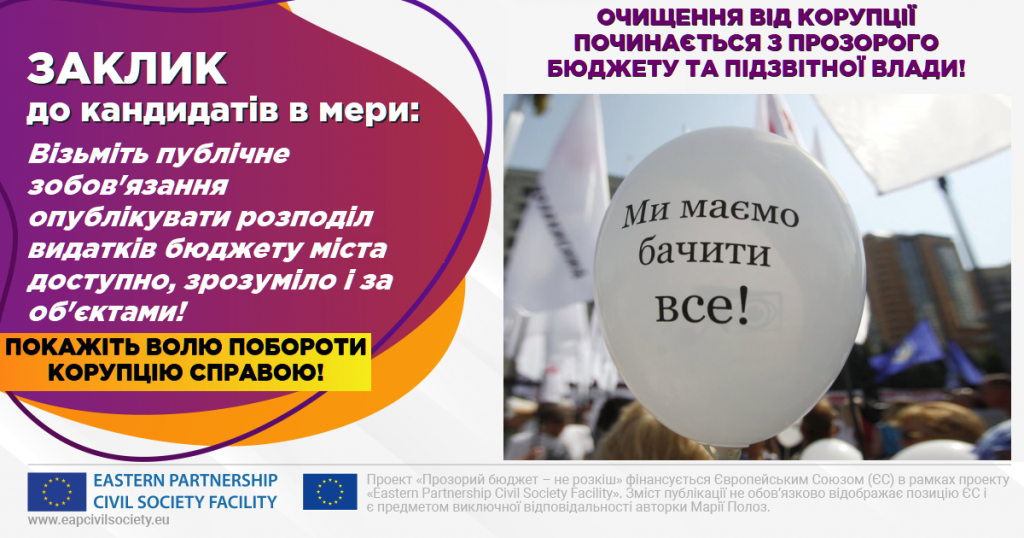 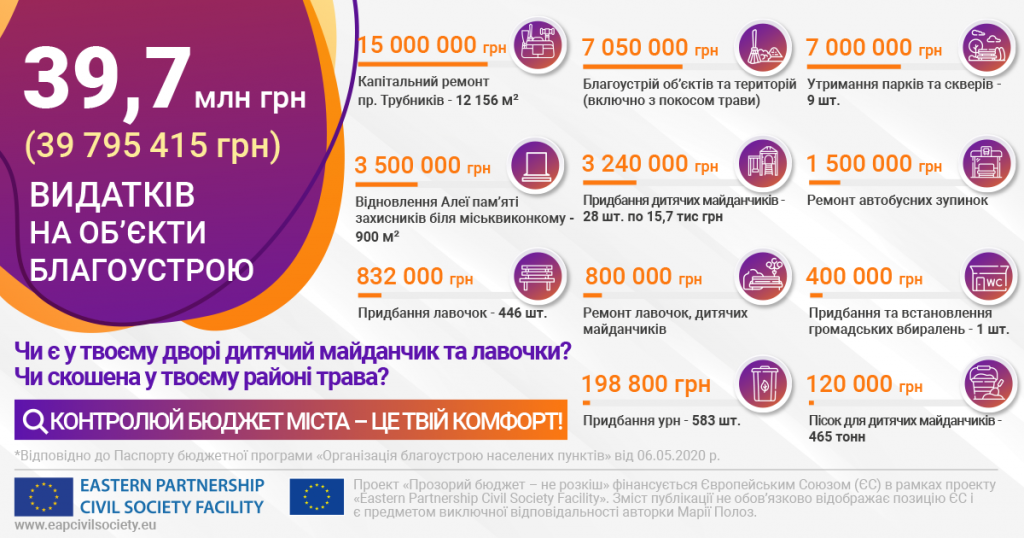 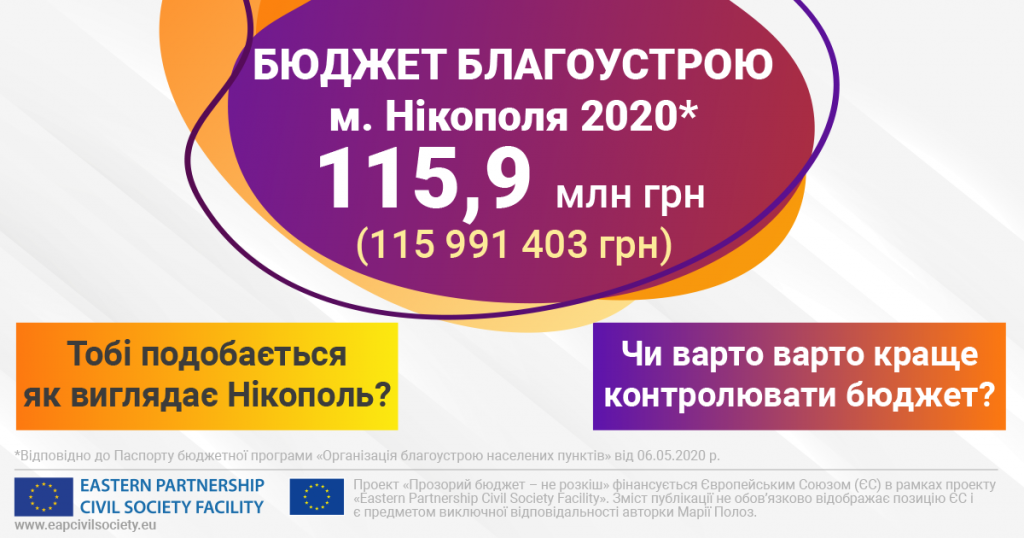 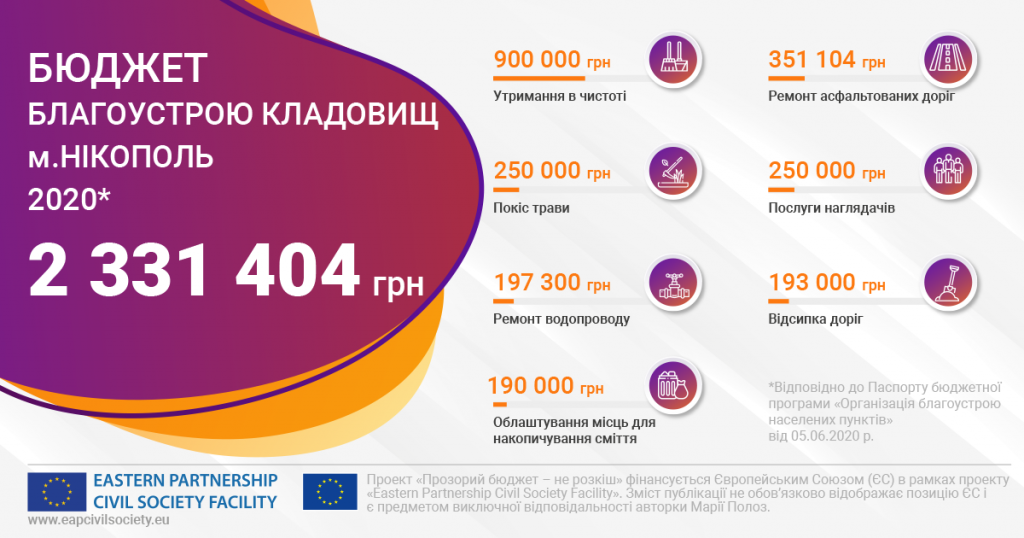 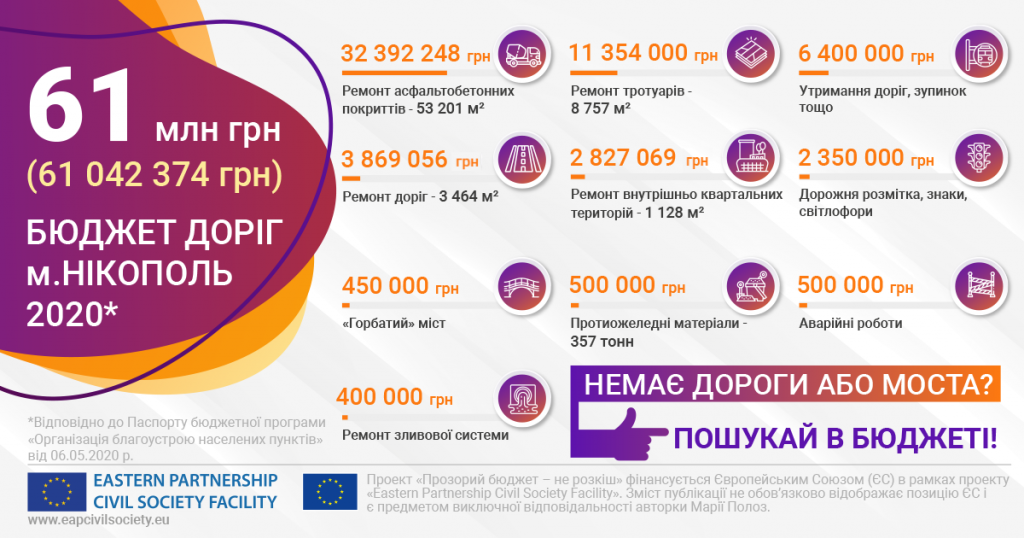 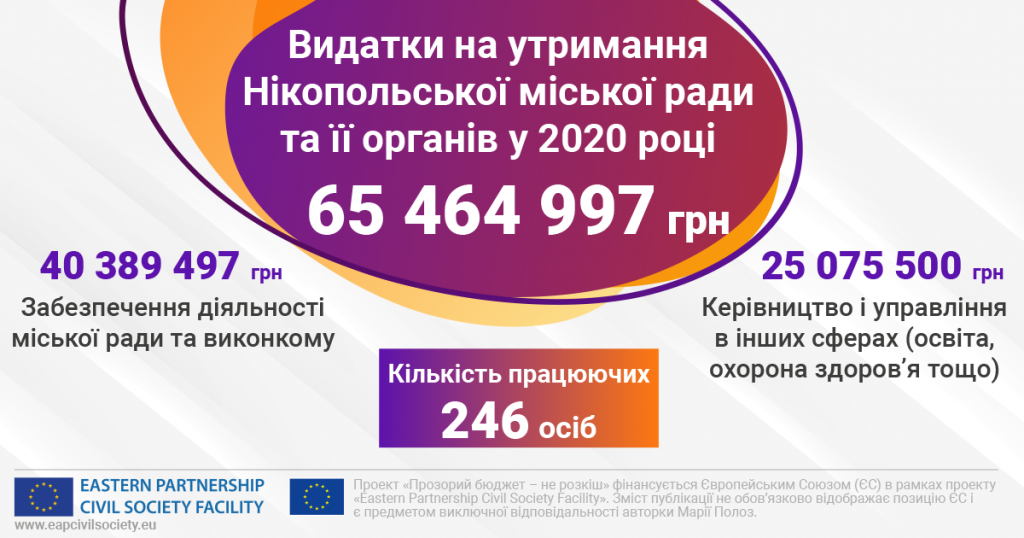 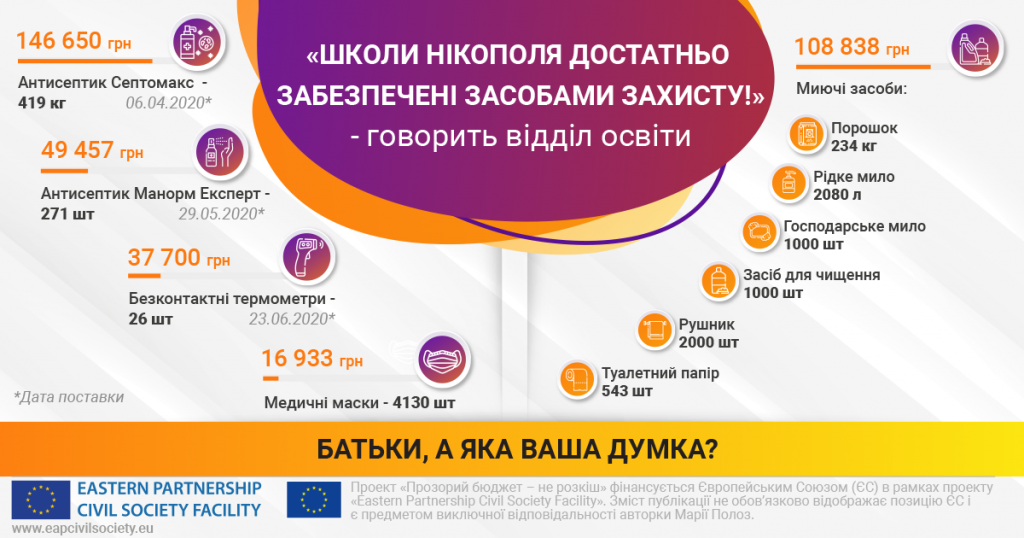 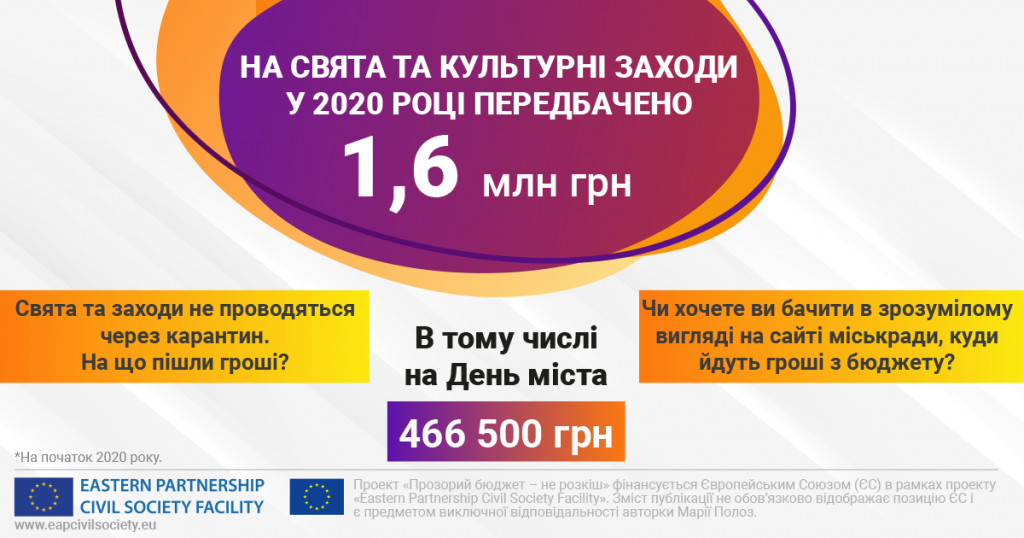 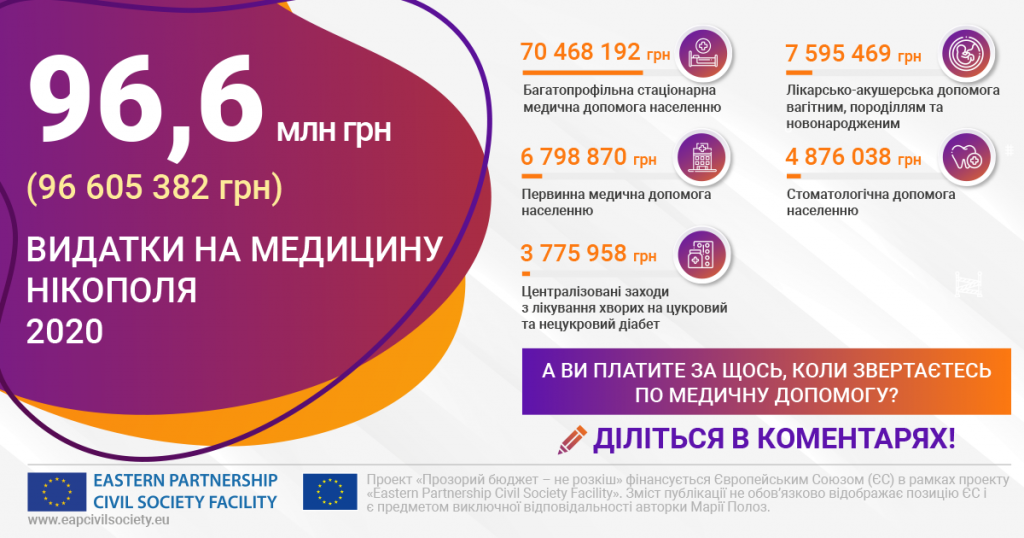 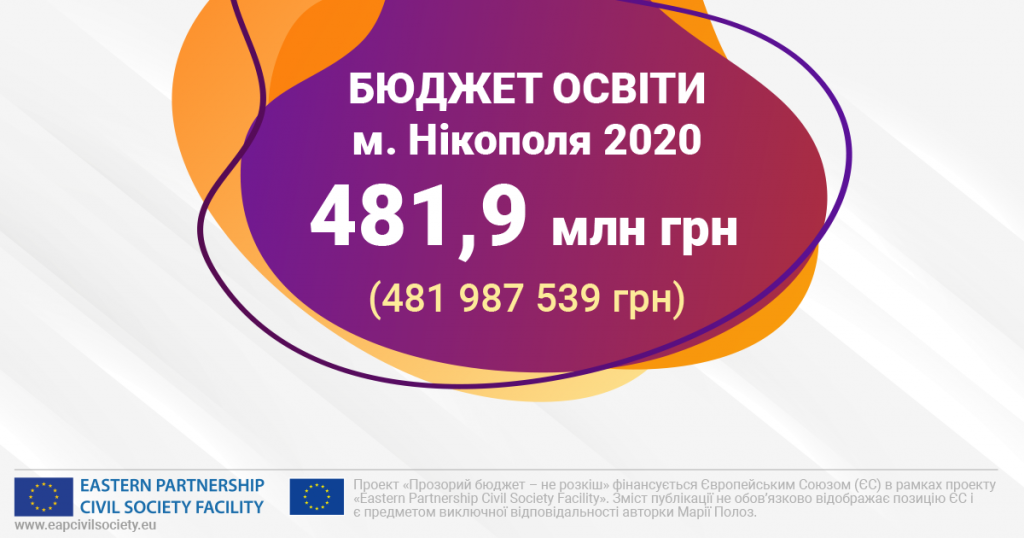 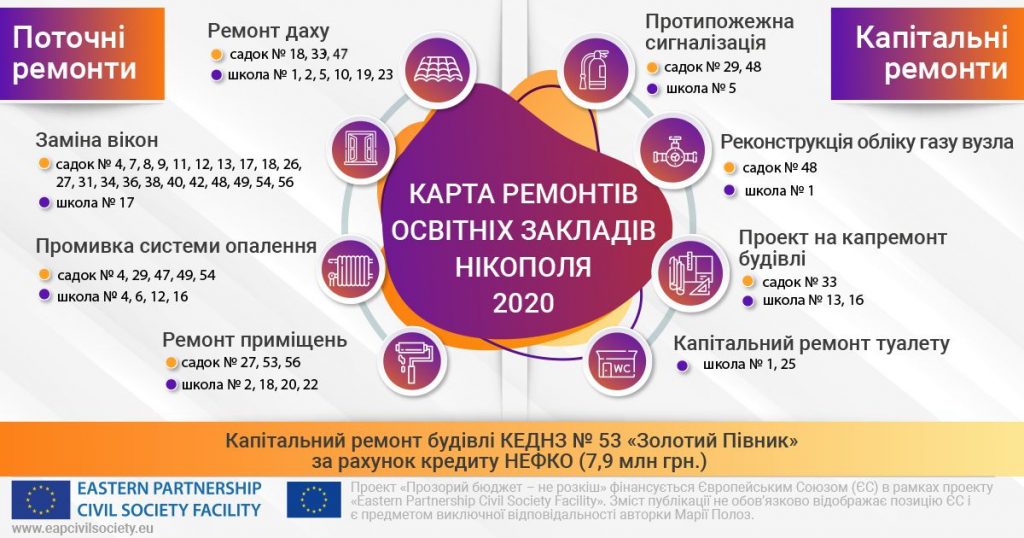 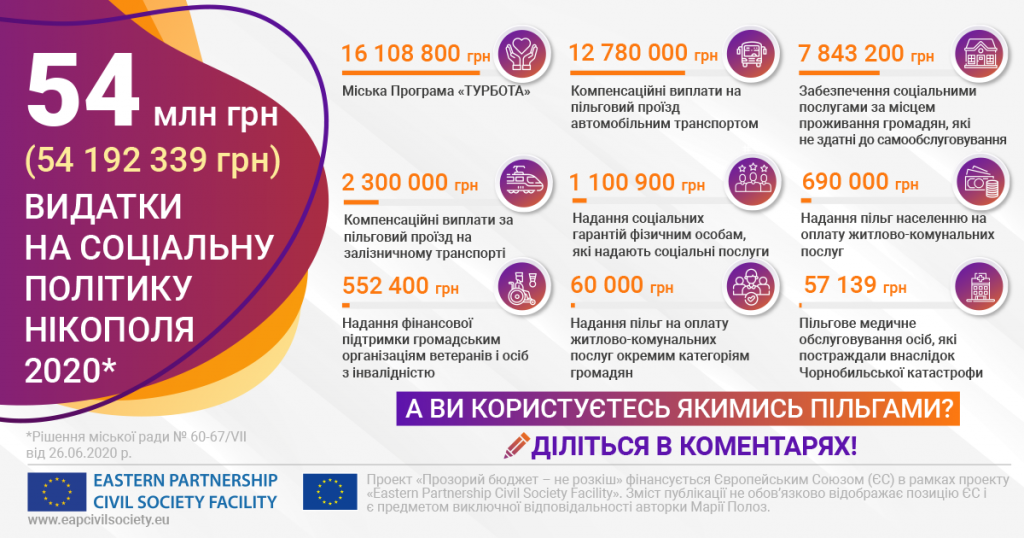